Thank you for the invitation to speak in front of this distinguished audience today. While working abroad to support democratic processes as election observers or technical advisors, the motivation grew to contribute to the strengthening of our own so-called established democracies in Europe.

Before addressing the topic, I would like to briefly introduce Election-Watch.EU and explain how and why it was created. Back in 2012, we approached the state government in Austria as we wanted the students at the Management Center Innsbruck to observe the Tyrol state elections. We thought that was a good hands on practical exercise for young voters to understand electoral practices and discuss democratic principles. The answer was negative as the Austrian legal framework pertaining to elections does not foresee citizen election observation and only provides for OSCE observers.

Together with like-minded Austrian election experts we started the non-partisan electoral reform advocacy platform wahlbeobachtung.org, which stands for election observation. We now publish information on our domain Election-Watch.EU as we direct our activities at the upcoming European Parliament elections in May 2019.

– to strengthen our democracies by improving electoral processes,

– electoral inclusion of citizens, especially the youth, and

Based on our experience, I would like to emphasise three aspects of election observation during this presentation:

First, elections are based on trust and commitment. As citizens our commitment to democratic principles is required for our democracies to become stronger and to keep trust in our electoral processes. Election observation is one form of exercising our civil and political rights.

Second, election obsevation matters increasingly. We cannot leave it to our governments and political parties to potect our democratic practices. While international diplomacy and international election observation can be an asset to stipulate electoral refoms, these reforms will not happen without citizens’ demand.

Third, the importance of inclusion in elections is interconnected with engagement. We live in the societies we create. Dissatisfaction, disengagement and voter apathy are often the result of failed politics. To live in a democracy is not a normality for everyone on this planet. Political engagement and empowerment, especially of young voters that their personal action and engagement matters, are required for a vibrant and strong democracy. In this perspective, Election-Watch.EU advocates for lowering the voting age to 16 accross the EU like in Austria, where political engagement and voter turn-out among first-time voters increased.

As the panel chairperson (Alexander Shlyk) already elaborated about international and regional commitments, let me talk first about trust.

Recent electoral events in so called established democracies – such as the 2016 UK referendum to leave the EU and the 2016 US Presidential Elections show two interconnected new trends. First, allegations of fraud despite widespread trust in the election administration. For example, US President Trump, tweeted about alleged fraud in the recent mid-term elections in Florida without providing any evidence. This irresponsible behaviour aversely affects the trust by the electorate in their electoral processes. Second, the trend of increased use of social media and disinformation to influence voter behaviour and therefore election results. The Electronic Frontier Foundation recently published a book with the title „the end of trust”. The EFF speaks truely that „(o)ur digital world can be fair or unfair, empowering or disempowering, utopian or dystopian depending on the choices we make along the way.”

The declining level of trust in elections is exacerbated by the polarising political contexts of many recent electoral processes, including right-wing populist campaigns as seen in the Netherlands and France (in 2017) or most recently in Brazil (2018). Also experiences around the referendum in Turkey (2017) and elections in Hungary (2018) demonstrate the necessity for election observation as they were able to point out anti-democratic policies. While we talked in the past about countries in transition on their path to democracy, we now witness a reverse trend of countries in transition to authoritarianism. The increasing polarisation in our societies is one of the signs that our national governance systems are going through crisis. Historically, worsening economic conditions of citizens are interrelated with stronger support for authoritarian and anti-democratic principles.

For these mentioned reasons international and citizen election observation, are becoming increasingly important to protect our democratic and human rights principles; specially the freedom of speech, the right to vote and stand in elections, and the right to a fair tial. Since the fall of the iron curtain, election observation has become a common practice in international politics. The origins of citizen election observation are commonly attributed to the emergence of the National Citizens’ Movement for Free Elections (NAMFREL) in the Philippines in 1986.  At that time, NAMFREL – with the support of businessmen, the Catholic Church, and the media – mobilised thousands of observers to conduct a parallel vote tabulation (PVT), which revealed different results than the officially announced tally. Subsequently, the PVT led to the ousting of President Marcos.

The idea of domestic election observation has since been taken up by numerous other civil society organisations worldwide, including in Eastern Europe. A document for national observers was commemorated at the UN in 2012: the Declaration of Global Principles for Non-Partisan Election Observation and Monitoring by Citizen Organizations. It declares that citizen observers ‘can be considered as specialized human rights defenders focused on civil and political rights, which are central to achieving genuine elections.’ Since then, the endorsing organisations of the Declaration of Global Principles, inlcuding Election-Watch.EU, formed the Global Network of Domestic Election Monitors (GNDEM) which contributes to guarantee the respect of civil and political rights. This is a network of some 300 organisations promoting solidarity, common norms and methodology, exchange of good practice and experience, as well as lessons learned among citizen observer organisations. This agreement on methodology and principles among citizen observers also protects against so called fake or zombie observers. These are „mercenaries” and „rougue politicians” hired by authoritarian governments to issue favouring statements about their undemocratic practices. Most recently that was observed in Eastern Ukraine and Cambodia. To publish names of politicians hired as fake election observers and to question their intentions are the best response to it.

Not many national observer organisations have emerged in states with established traditions of holding democratic elections. The lack of national observation initiatives in so called Western established democracies might be rooted in public confidence and thus, the need for more engagement and scrutiny by citizens. As questions about electoral integrity – and thus, a potential need for more election observation – also emerge in countries with established traditions of holding democratic elections, the following key question arises: are international and citizen election observation actually possible and/or encouraged in states with broadly perceived electoral integrity  promoting election observation globally?

Election-Watch.EU conducted a comparative analysis based on OSCE/ODIHR reports on 32 countries, including all EU member states, plus Iceland, Norway, Switzerland, and Turkey. The comparison showed that 27 of the 32 countries have not fully considered or implemented the OSCE/ODIHR recommendations for accreditation and legal status of election observers. Only in the cases of Croatia, Finland, the Netherlands, Norway, and Romania, there is full compliance with OSCE commitments. Poland recently changed its legislation and citizen election observers were provided access to recent local government elections.

In my own country, Austria presidential run-off elections were repeated in 2016 due to irregularities and election officials not following proper procedures. No manipulation was found however. Already in 2010, the OSCE observers recommended improved elecotral procedures for postal voting in Austria. Despite OSCE recommandations, no substantial reforms were undertaken to monitor performance. Today politicians discuss the question who is responsible for the extra costs of 15 million Euros paid by the governemnt? The Freedom party even sued the state for compensation due to the extra campaign costs. As citizen observers, we have been advocating for compulsory training of election officials and for opening the nomination process of election officials towards civil society and especially young voters. Greater inclusion and higher transparency paired with well trained election staff best counters allegations of fraud, or costly rerun elections.

International organisations are also increasingly demanding electoral reforms in Europe. As for example, the Venice Commission of the Council of Europe states that ‘(i)t often happens that recommendations made following election observation do not have any effect. In such cases, European countries should show a positive example and, if necessary, reform their electoral legislation in order to include provisions on the observation process.’ ‘Follow-up’ to OSCE/ODIHR recommendations has been a long-standing demand within the OSCE.  Similarily, the EU ‘Action Plan on Human Rights and Democracy’, adopted in 2015, underscores the need to ‘consolidate best practices for leveraging EU and OSCE/ODIHR electoral recommendations in political dialogues and democracy support activities’.

I would like to conlcude by pointing out key recommendations emphasising the importance of citizen election observation.

First, the integrity of our electoral processes cannot be taken for granted, as robust as they might appear. Perpetual monitoring and continuous development are important to guarantee the exercise of civil and political rights to citizens. Therefore, the inclusion of civil society expertise in elections is essential. EU governments and political parties need to demonstrate genuine commitment by recognising the value of election observation, not only outside of Europe but also within Europe, to further strengthen our democracies. In this spirit, we encourage other civil society organisations, parliaments, and governments in the OSCE region to follow-up on OSCE/ODIHR recommendations. This would contribute  to recognise the value of citizen election observation in line with OSCE commitments, and to provide the relevant legal provisions.

Second, we recommend European politicians to further building trust into election management bodies conduct, at first by following up on election observer recommendations, including those by OSCE, Election-Watch.EU and other acknowledged observer organisations.

Third, our European democratic practices are currently tested by anti-democratic forces from within our societies and by foreign governments. Our reaction should be predominantly to increase transparency, inclusion and technical security of electoral processes. The new challenges should not provide a pretext to limit human rights and we need to counter the increasing surveillance, the curtailing of free speech and limiting of other fundamental freedoms.

Fourth, but not least, we encourage citizens to become an actor in democracy, in their own society, at local level. To take up their responsibilities by staying alert against anti-democratic movements, engage in strengthening democratic institutions and further develop democratic practices by exercising human rights as citizen election observers. Democracy starts where people live. Bring the change you want to see.

Thank you for your kind attention. 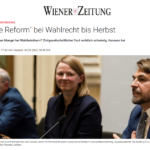