OSCE/ODIHR publishes findings and recommendations for the 2017 elections 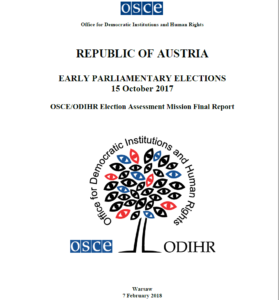 The final report of the OSCE / ODIHR Election Assessment Mission to the parliamentary elections on 15 October 2017 once again confirms that Austria is a solid democracy. However, further improvements are needed to fulfill Austria’s obligations under the OSCE and other international standards for democratic elections.

The Election Assessment Mission, sent by the OSCE/ODIHR (OSCE Office for Democratic Institutions and Human Rights), lists 17 recommendations on how to improve electoral and electoral voting and recalls that unaddressed recommendations from past election missions in 2010, 2013 and 2016 remain valid. With a total of nine deployed OSCE/ODIHR election missions, Austria is also the sole “front runner” within the established OSCE democracies and lags behind, especially Scandinavian countries, in adopting best practices and the implementation of international recommendations.

The Final Report concludes that “(…) a number of previous OSCE/ODIHR recommendations remain to be addressed, including with regard to citizen observation, the composition of election boards, candidate registration procedures, campaign finance rules, and pre-electoral complaints and appeals. Many OSCE/ODIHR EAM interlocutors raised concerns over restricted access to information from public authorities, including about meetings of the election administration, which diminished the transparency of aspects of the elections.”

The OSCE/ODIHR report also refers to wahlbeobachtung.org: “The Austrian citizen election observation organization, wahlbeobachtung.org, was denied accreditation by the MoI on 16 August on the grounds of a Constitutional Court ruling stating that those not explicitly allowed at polling stations are not permitted to attend.” and includes once more a recommendation to include citizen observers in electoral legislation:  “The election law should be amended to allow for citizen observation, in line with paragraph 8 of the 1990 OSCE Copenhagen Document.”

See Final Report of the OSZE/ODIHR Election Assessment Mission to Austria 2017 on the OSCE webseite.