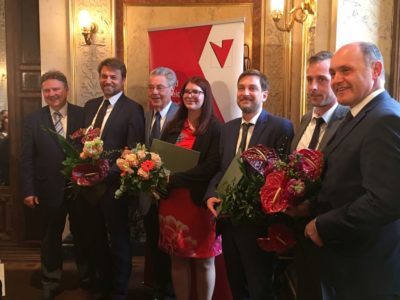 Vienna: Every two years, the Association of Austrian Adult Education Centers awards the Barbara Prammer Prize for outstanding work and initiatives in the field of civic education. The Ludo Hartmann Prize Jury and as additional jury member, Mag. Gertraud Diendorfer-Ratzenböck from the Democracy Center Vienna, awarded this prize to the Arbeitsgemeinschaft Wahlbeobachtung.org for their project of the same name. The awards ceremony took place on 5 April 2018 in the premises of Parliament. in the Palais Epstein, in Vienna. The President of the Austrian National Council Mag. Wolfgang Sobotka has invited and opened the event, which commemorates the important late President of Parliament Barbara Prammer. The prizes were awarded by the President of the Association of Austrian Adult Education Centers, and former President of Austria Dr. Heinz Fischer, as well as the Chairman of the Board Dr. Michael Ludwig. President of Parliament Mag. Wolfgang Sobotka congratulated the winners on the awards.