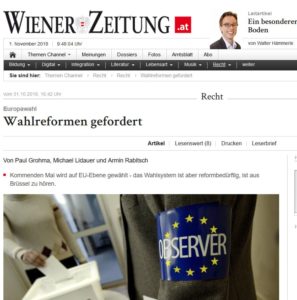 Ahead of the European elections in May 2019, election-watch.eu (wahlbeobachtung.org) highlights the electoral reform process at European level and underlines the benefits of international and citizen election observation. Election-watch.eu (wahlbeobachtung.org) explained the details in a guest commentary in the Wiener Zeitung on 2 November 2018: (Wahlreformen gefordert – Wiener Zeitung Gastkommentar pdf download)

In order to harmonise the conduct of European Parliament elections and counteract low voter turnout through “Europeanisation”, a majority of Members in the European Parliament voted in favor of electoral reforms in November 2015. The European Council, however, after two and a half years agreed only to a few areas of reforms. The implementation of the reform proposals faced difficulties, as the Member States are obliged to decide unanimously and some reforms require constitutional changes in some EU member states.

As a tool to continually improve electoral practice, regular observation and evaluation of the European elections based on international standards and good practices would be desirable. The Office for Democratic Institutions and Human Rights of the Organization for Security and Co-operation in Europe (OSCE/ODIHR) monitored the European elections in 2004 and 2009 and formulated recommendations for the further development of the European electoral law. In order to make this possible, as well as for the implementation of other electoral reforms, a sufficient degree of political will is needed. Although all EU countries have signed the Copenhagen Document of the OSCE (1990), which obliges participating States to invite OSCE observers and accredit citizen observers, many EU countries are defaulting on implementation (see election-watch.eu article). According to OSCE/ODIHR reports, only four EU Member States (Croatia, Finland, the Netherlands, Romania) have so far provided a sufficient legal framework for international and national election observation.

There is need for electoral reforms at the European level, not only in harmonising the electoral conduct in all EU member states but also in terms of implementing international commitments. Election observation could be used as tool to support the necessary legislative and political reform processes at the European level and in the Member States.