Vienna/Brussels, 7 December 2021: Election-Watch.EU was invited to participate in a discussion of members of the European Partnership for Democracy (EPD) in the context of the Global Democracy Coalition Forum. This global multi-stakeholder coalition for democracy has been gathering in a virtual forum on 7 December 2021 to galvanize a global conversation on democracy and generate inputs to the Summit for Democracy which – launched by US President Joseph Biden – will be held on 9 and 10 December 2021. Over 40 workshops took place within a timeframe of 24 hours. Nine EPD members hace contributed to the lively debate.

As autocratisation has picked up across the world, elections have gained importance as the key avenue for arresting democratic decline in many countries. At the same time, citizens in many places around the world feel that elections are not a mechanism for change, protesting against ballots they feel are unfair or outdated. The discussion between democracy supporters under the title Tired of Elections? Creating Momentum in the Face of Electoral Fatigue looked at the challenges of supporting elections and how to create momentum for needed electoral reforms. The organisers posed the following central questions: What are the global trends in terms of elections? Why are elections still so important for democracy support? What are the most difficult areas of democracy support linked to elections? What are the key steps domestic actors should take after an election? What can international actors do better?

Election-Watch.EU has contributed to this discussion on the basis of its successful initiatives in Austria. In 2018, wahlbeobachtung.org/Election-Watch.EU initiated a discussion on  electoral reforms in the Austrian parliament, to which the constitutional speakers of all  political parties represented in parliament contributed and in which the election department of the Ministry of Interior as well as OSCE/ODIHR also participated. Subsequently, wahlbeobachtung.org/Election-Watch.EU, together with the University of Vienna, has conducted a research project on a concrete electoral reform issue – the service of poll workers – the results of which will be presented in the Austrian parliament in the context of a fresh debate on electoral reforms on 17 December 2021.

At European level, Election-Watch.EU pursued similar goals. The results and recommendations of the first-ever civil society-driven election assessment of the European elections in 2019, covering all EU member states, were presented to the network of European Election Commission bodies convened by the European Commission and to the European Parliament, and continue to contribute to ongoing European debates on electoral reforms. 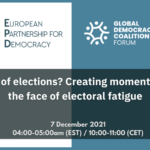 Infosheet about the German federal elections