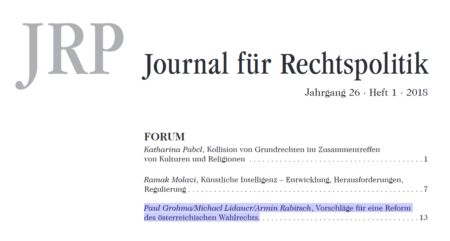 A revised and more comprehensive version of the catalog for electoral reforms compiled by wahlbeobachtung.org (Election-Watch.EU) has now been published by the Journal für Rechtspolitik.

Austria is the host country of the Organization for Security and Cooperation in Europe (OSCE) and chaired the OSCE in 2017. Since 2010, the OSCE Office for Democratic Institutions and Human Rights (OSCE / ODIHR) has deployed a total of nine election missions to Austria. The OSCE electoral assessment and election expert missions resulted in a total of 44 recommendations of which only two have  to date been implemented.

Building on Austria’s international and regional commitments as well as the recommendations of the OSCE and the Group of States against Corruption of the Council of Europe (GRECO), the civil society working group of Austrian election observers and – experts, wahlbeobachtung.org (Election-Watch.EU), has published a detailed catalog on electoral reforms in Austria. The findings and recommendations are based on thorough research and more than fifty interviews with electoral stakeholders such as political parties, representatives of the Federal Electoral Authority and constitutional law experts. The reform proposals discussed in the article concern the areas of electoral legal framework and electoral system, electoral administration, polling station commission members, registration of parties and candidates, campaign and party financing,  postal voting, election day administration, media and election reporting, complaints and appeals, as well as political education, voter information and election observation.